You are here: Home / News

Building regulations require foul drainage to be connected to a public sewer or where this is not practicable to one of the following:

The above options all have advantages and disadvantages, in order to decide which option is most appropriate to meet your requirements please study the following information.

The downpipes were surveyed and observed to be leaking from various open joints and defects resulting in risk of damp and damage to the building façade.

Drainline successfully installed specialist structural full length liners from the roof level hoppers to the basement level outlets ensuring future serviceability and water tightness of the downpipes, this method of remediation was selected due to its avoidance of disruption, speed of installation and preservation of the existing external rainwater downpipes.

Drainline are specialists in relining existing pipework above or below ground, contact us if you have defective pipework, difficult to access downpipes or downpipes of architectural interest.

The carrier pipe is part of the Chilworth Flume installation; the flume is used for research projects involving the flow of water and is a site of European importance.
The carrier pipe had been leaking resulting in water flooding other parts of the site.
Once the carrier pipe had been cleansed of silt and debris using one of Drainlines own large volume combination units, Drainline operatives installed the liner and returned it to service within a time period of 24 hours.

A 9mm thick cold cure liner supplied by RSM Supplies was used for the project. A cold cure liner was selected due to the variable weather and the confines of the site making manoeuvre around the site difficult.
Once the liner was inverted into the host pipe the inversion water was heated to 80 degrees for approximately 8 hours using two mobile diesel boilers with a combined output of 3 million BTU’s.

Wayne Holdaway, Commercial Manager for Drainline said, “ Again Drainline have shown they can respond quickly to clients varying projects whatever level of difficulty and still provide a thorough and quality service with the least amount of disruption”. 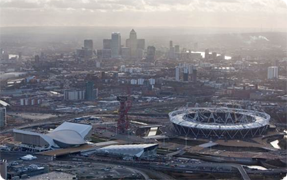 Drainline have recently been appointed to carry out Air Pressure/Testing on the drainage system at the Olympic Village.

Drainline were able to win this contract due to proven experience in carrying out this type of work. Using latest techniques, tools and equipment including air bags and pressure gauges specially designed bungs, we have been able to meet demanding production targets for the amount of tests carried out and logged in short periods of time. We also work to the latest British Standard and Building Regulations ensuring our clients can get projects signed off enabling them to meet tough deadlines set on projects such as the Olympics.

We are also working on projects that include British Waterways & Theatre Royal. 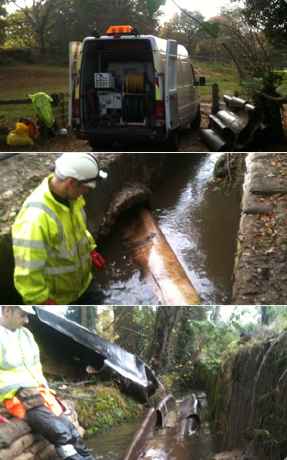 Heavy rainfall had caused the stream to become swollen and large amounts of debris and silt to be washed to the headwall of the culvert causing the stream to flow over the roadway surface, large objects of debris and the weight of water on top of the liner had structurally damaged and deformed the liner, this effectively blocked the culvert necessitating removal of the liner as water was flooding the highway causing a real hazard to road users.

Once alerted the roadway was kept safe for the duration of the works by using vacuum tankers to overpump the flood water.

Removal of the liner was problematic due to the large volume of flowing water involved and only having direct access to the culvert downstream of the headwall. Drainline used a combination of ultra high pressure water cutting and a bespoke winched cutter manufactured especially for the job by our workshop, once two longitudinal cuts had been achieved the full length of the liner, the liner was then winched out of the culvert, once again allowing full flow of the stream and the roadway to be returned to normal usage.

Drainline are shortly to install a structural slip liner to the culvert to ensure its future serviceability.

Drainline have proved once again to offer and deliver a service that far surpasses others, Drainline can and will adapt to situations and offer realistic solutions to problems that might otherwise prove costly, disruptive and even insurmountable, carrying out any works to a 600mm diameter line at short notice would be an achievement in its self but it is a real testament Drainline operatives were able not only to undertake this difficult task but succeed with minimal disruption”. 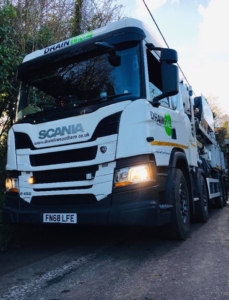 We have recently added a High Volume Recycling Combination tanker to our already impressive fleet. The unit is capable of cleaning all types of sewers and drains with the ability to carry out various liquid waste activities including tank emptying and other services.

This tanker can reduce the costs to the client and will also save time on site due to the flexibility it has to carry out a full drain clean and de-scale.

Another added benefit is the gully cleaning arm fitted to the unit. This has the ability to clean any gully of debris and then refill with fresh water.

For more details on our Liquid Waste Disposal services. 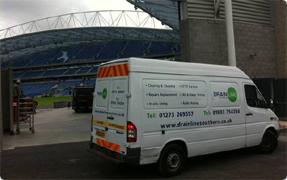 We have just recently carried out a pre-adoption CCTV drain survey to the underground drainage system on the new Brighton and Hove Albion Amex stadium.

The survey led to other specialist works while on site, which enabled Southern Drainline to offer our full range of services to our client. 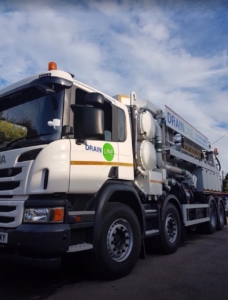 Up to 95 gallons per minute jetting flow, pressure at 2500psi

Up to 300 metres of 1 ¼ thermoplastic jetting hose

On board weigh loader