The CCTV survey systems are suitable for use in drains, sewers and many more applications including confined spaces and unsafe structures. 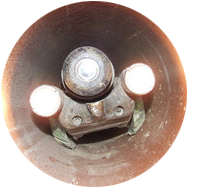 We can deal with large pipework diameters from 150mm through to 2000mm, which can be surveyed using our main line CCTV equipment. Although normally mounted on our vans, Drainline also has portable main line equipment that can be used when vehicle access is limited.

For smaller diameter pipework over standard distances, we use colour pipe TV Inspection systems for surveying pipe diameters from 50mm through to 225mm. This system has features like on-screen text and auto on-screen meterage readout.

Lines of up to 350 metres in length can be surveyed from a single entry point using this equipment. WRC validated reports are provided and available in different formats and all our skilled operators are trained in sewer defect classification, confined space entry and new roads and street works.

Drainline constantly invests in operative training and equipment, as we own all our equipment and plant costly hire charges are not passed down to the customer. For more details contact us now.